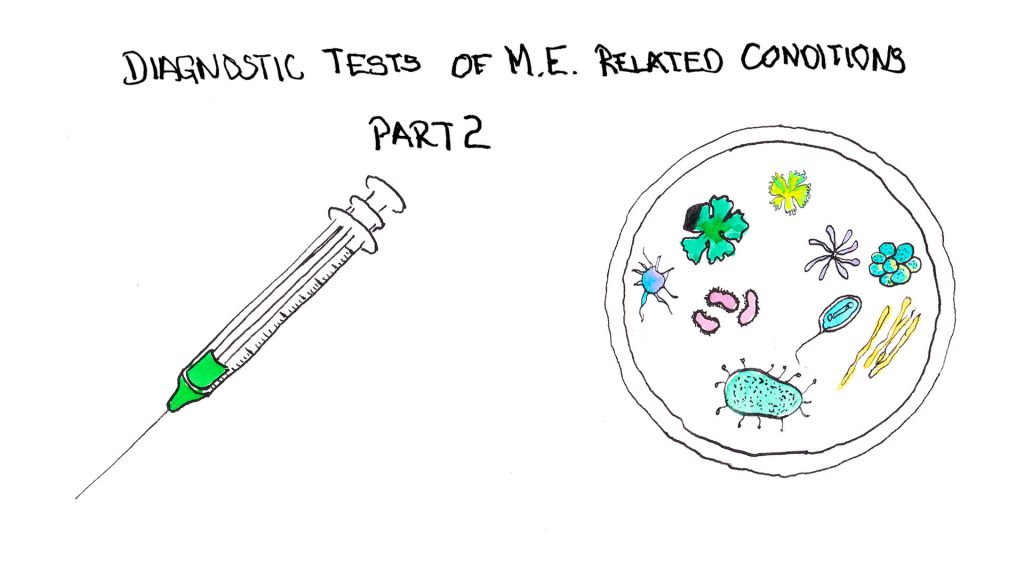 In my last post about diagnostic tests I promised to share the next set of tests I’ve had done and what I’ve learned so far. So here goes.

I changed practitioners and the new clinic I attended (Breakspear Medical) recommended over a dozen tests.  Hmmm seemed a bit excessive to me at the time.  The costs varied from just under £100 to over £500 per test bringing the total cost to an eye watering figure. I knew I had to review the list and prioritise (or get a new mortgage) to bring down the cost to an affordable level.  I also had to ensure I didn’t miss any test critical to recovery.  Eventually I opted for 6 tests that seemed to be likely to give sufficient information at this stage to be able to make progress.  Here’s what I chose:

This tests for chemical sensitivities that can compromise the immune system. At a cellular level these can induce potentially harmful calcium penetration to white blood cells (lymphocytes in particular).  Electro-magnetic fields enhance this phenomenon.  This test analyses your susceptibility to this against a range of potential toxins and details your susceptibility with and without the effect of electro-magnetic fields.   I tested for a standard selection.  This highlighted the chemicals that cause me the most problems.  For me, this was everything from nickel (think cheap jewellery) to formaldehyde.  You can select up to an additional 12 chemicals if you think there are other chemicals you may be sensitive to.

Resulting Action:  I picked out the most reactive substances and have eliminated most of them from my environment.  I’ve tried to reduce my exposure to electro-magnetic fields but complete avoidance is impossible unless I buy my own island with no electricity.  Toxic substances are absolutely everywhere. I was unaware of them and the high levels of toxicity prior to becoming ill. I’ve changed a lot here but still have more to change alas.

Has it worked?  On it’s own I don’t think so, but this is more about lightening the load on my body and giving it the best chance to heal.  I don’t think I will go back to any of the toxic products I have replaced.  Why would I when they have such an impact on my body and adversely impact my liver?  This whole experience has opened my eyes to all the toxins that my body is subjected to every day.

This tests for the possibility of histamine intolerance.   That will be another positive for me then!  Histamine is involved in many processes in the body from inflammatory responses to acting as a neurotransmitter.  It is produced by white blood cells (mast cells and basophils) and is controlled in the gut by an enzyme called diamine oxidase.  This test can help with diagnosing Mast Cell Activation disease or so I thought when I agreed to it.  I’ve since discovered that it isn’t always that accurate.  My symptoms already clearly indicated that there are high levels of histamine in my gut.  Did I really need a test to confirm this?

This also looked at standard heamatology and biochemistry that I normally have done by my GP (see my previous post Part 1 for details of this).

Resulting Action:  I’ve made more diet changes to avoid foods either high in histamine or histamine liberating.  I had already identified eggs as a reactive food for me and now I know why.  Egg whites are histamine liberators.  I supplement with the enzyme diamine oxidase which breaks down histamine.  The symptoms of histamine intolerance can mimic an allergy and may be one of the reasons for my food intolerance issues.  There’s a great site called Healing Histamine that is full of really useful information on this subject.

Has it worked? The supplements definitely help with symptoms as does avoiding specific foods.  What still isn’t clear is the reason for the potential histamine intolerance.  One possibility is the Candida and the inflammation it induces.  This is why this test probably isn’t much good in isolation in my opinion.

I’ve grouped the next 4 tests together:

This is a blood test that measures levels of IgA, IgG, IgM and Immune complex.  The IgA, IgG and IgM are antibodies and the testing here is against Candida antibodies.  My levels came in at 5 times the maximum level, the highest my consultant had ever seen in his 11 years working at Breakspear Medical.  Enough said!

My gut permeability profile indicated Leaky Gut Syndrome.  Probably inevitable given the results of the Candida profile.  The two seem to go hand in hand and the gut permeability can be a result of the chronic candida and other infections slowly impregnating and damaging the gut lining.  However, as I am borderline Type 2 Ehlers Danlos Syndrome (this effects the connective tissue) there may be an existing propensity.  It seems to be accepted that there is a correlation between Ehlers Danlos Syndrome and Leaky Gut Syndrome.  Whilst this may explain how circumstances have conspired against me it doesn’t cure me.  So what did this tell me?  This is contributing to the heightened level of food intolerances that I am suffering from and difficulty in digesting food, malabsoprtion of nutrients, intestinal inflammation and the resulting nutritional deficiencies.  It also explained why I’ve had so much more success with sublingual supplements rather than tablets.  Most of the tablet supplements have most likely just given me expensive poo.

It took an unpleasant three days to provide this to the lab. I got a detailed report showing bacterial and yeast infections.  It also picked up on a rare form of Candida and identified the actual type and levels of good and bad bacteria in the gut.  Inevitably it indicated gut dysbiosis commensurate with such high infection levels as well as Leaky Gut Syndrome.  It can also pick up on any parasites which are surprisingly common.  Mine came back negative on that one (thank the lord).  I found the chart of the most effective herbal and prescription medicines really useful. Here’s an extract from my report: 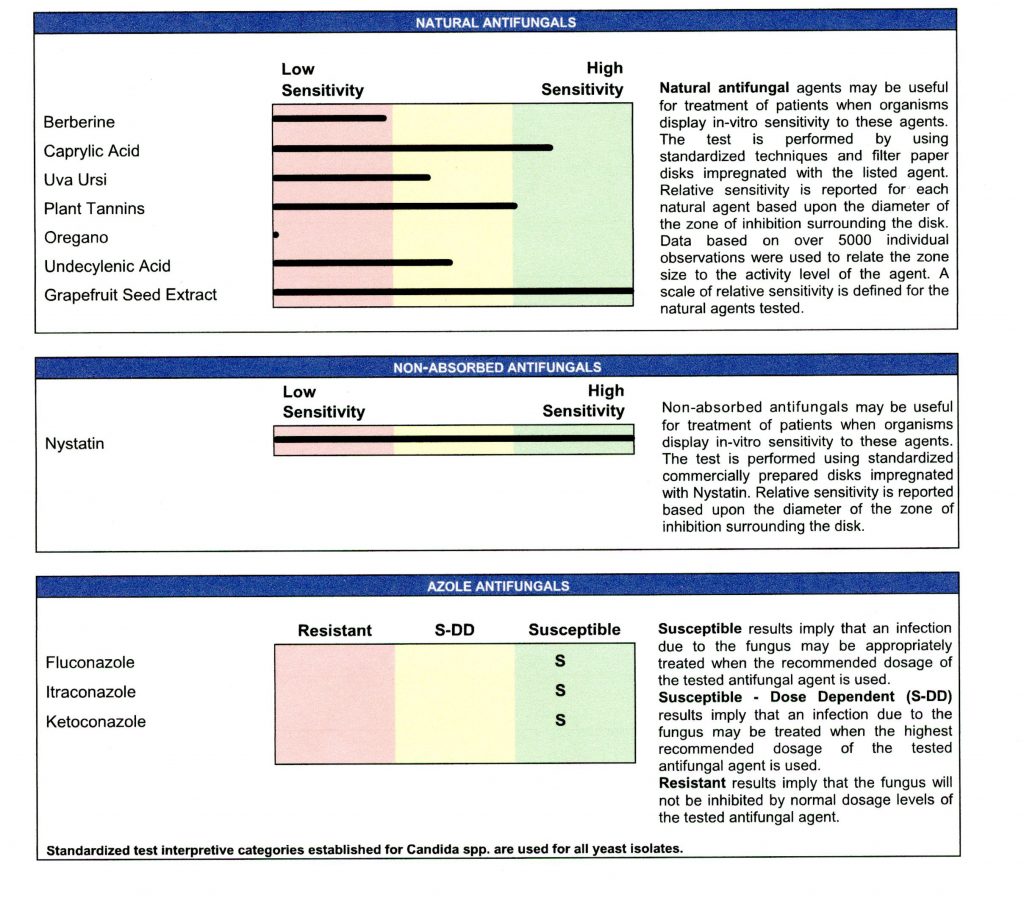 I hated this test.  I had to drink a solution of lactulose and took a horrible reaction to this.  It took me weeks to recover.   Thankfully the results were negative this time but I have heard of others getting a false negative result on this.  I am hoping this is not the case for me and this is true progress.  The Organic Acid Test I detailed in Part 1 of this blog post seemed to indicate I had SIBO so fingers crossed that in the 6 months between these tests there has been progress.

Resulting Action:  The crazy high levels of Candida and the detail of its responsiveness to particular herbals and prescription medicines meant I was given a whole new set of supplements and drugs.  I’ve counted up a total of over 20 supplements so far.  I’ve also had to change my diet again.  This time the exclusion is all grains and high carbohydrate vegetables.

Has it worked? Probably too soon to tell to be fair.  However, the change in supplements took me 6 weeks to implement as I reacted to so many of them and they were all new to me.  I also reacted to the prescription medications and haven’t been able to implement the Nystatin yet.  I reacted quite badly to this so am now about to try it in capsule form to see if I can tolerate it in that way.  The intolerance is most likely a combination of the Leaky Gut Syndrome and a herxheimer reaction (where symptoms flare up).  It’s as if this disease conspires against any possible cure!

What would I do differently when deciding on tests?

Having had so many tests done here’s what I would do differently:

My empty pockets are telling me I’ve spent enough on testing.  I know what needs to be addressed, at least initially. However, I know that there can be many other underlying infections and conditions that haven’t been tested and could be hampering my recovery.  For now they will just have to wait.

What tests have you had done?  Which ones did you find the most useful and why?

This site uses Akismet to reduce spam. Learn how your comment data is processed.

Follow My Invisible World by email. Pop in your email address and receive notification of new posts by email

Searching is in progress

The views shared  on this site are for information purposes only.  The author is not responsible for any adverse consequences of any products featured.  You are advised to consult a professional for any medical concerns you have.